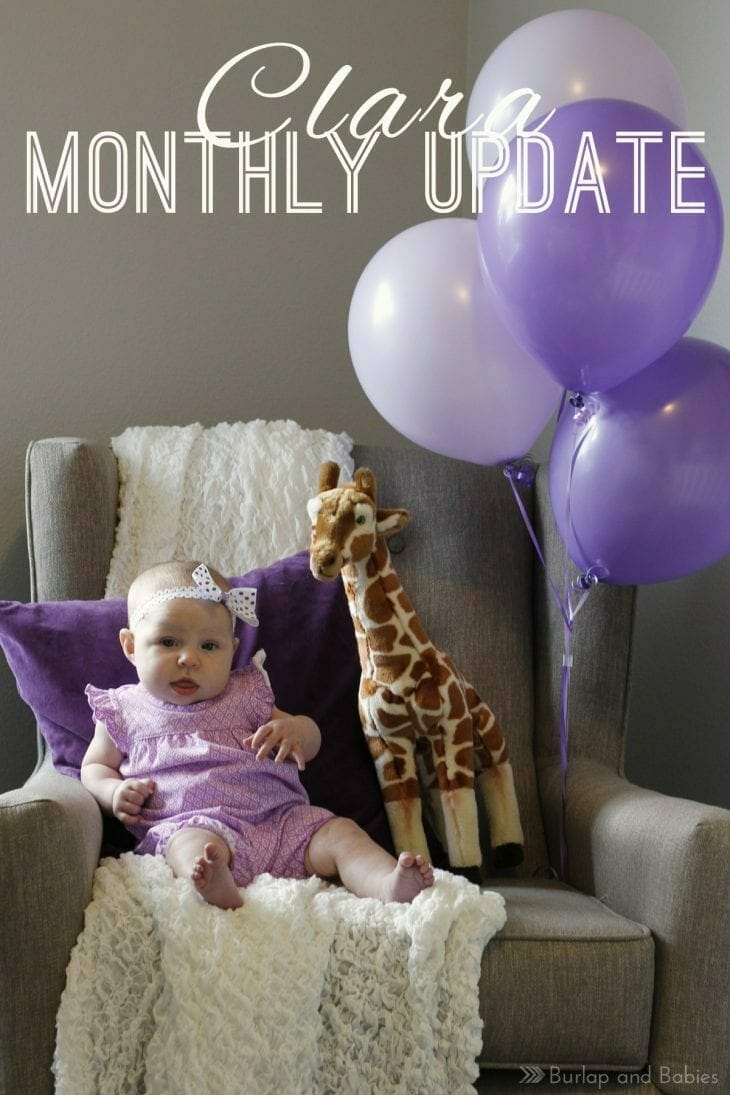 Biggest milestone that I almost forgot about when writing this post was laughing! Clara started laughing this month and it’s the greatest thing ever!! A few days ago I had her laughing so hard I think for sure she probably peed her little self. You can watch her the first day she started laughing here.

Two weeks ago, Clara woke up three nights in a row for about 5-10 minutes each time and needed soothing to go back to sleep. On that last day, she started rolling over from back to front. Like we were making dinner and look over and she was on her back one second and the next on her tummy. From there, she rolled over probably 10-15 more times in one evening. I love the Wonder Weeks book for helping understand all the developmental changes going on and so that when she started waking up I didn’t get concerned because I realized she was probably on the brink of a big change….hence the rolling over. 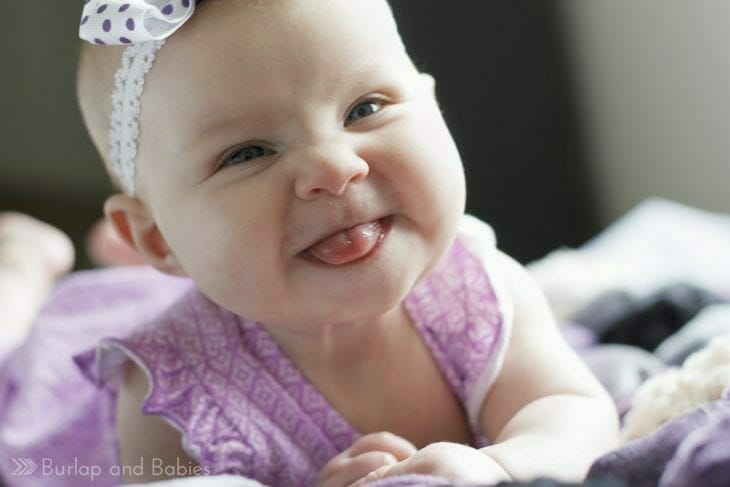 Getting stronger every day. Yesterday in new mom’s group, Clara went over an hour for tummy time. She doesn’t mind it at all. Especially now that she has such better control of her hands and can reach out for toys to keep her occupied she doesn’t get bored. She can sit well with assistance and I hope will be sitting on her own within the next month. In her swing or carseat I will often find her pulling forward as if she is trying to do situps. I know she is so ready to start sitting up on her own. As for standing, she loves when I stand her up! She just gets so excited and proud of herself. I just wish she could talk so I could hear what’s running through her head.

This is her face when she is standing typically. I just love her!! 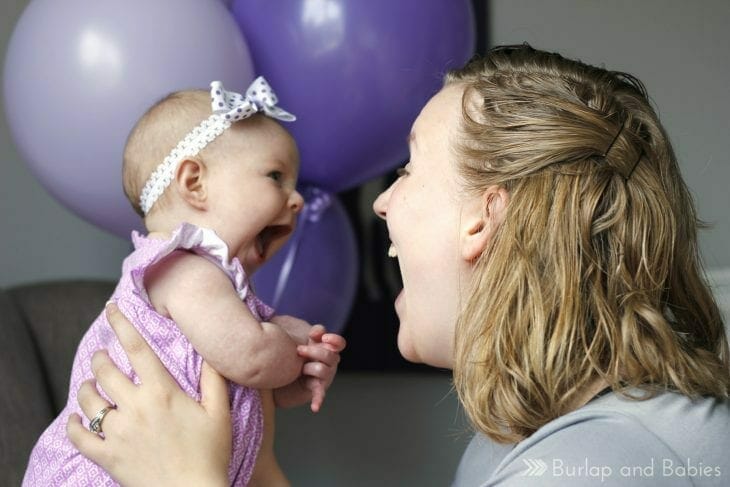 About a week ago a tooth appeared close to the surface. It hasn’t broken skin yet but is just hanging out ready to pop through at any time. I think because of that, she pretty much constantly has fingers in her mouth. Rarely is she just hanging out without something in her mouth. Out of the 200 photos I took of her yesterday (yes, that was all done in under 20 minutes…I may have an unhealthy obsession with taking pictures of this cutie) probably more than half of the photos she has two fingers in her mouth. 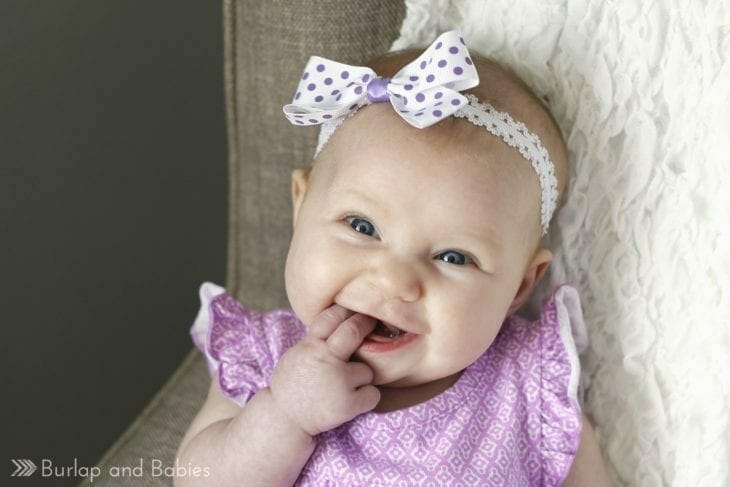 Clara has started tucking in her upper lip. It’s just the cutest!! She coos like that and blows bubbles with her lip tucked in. 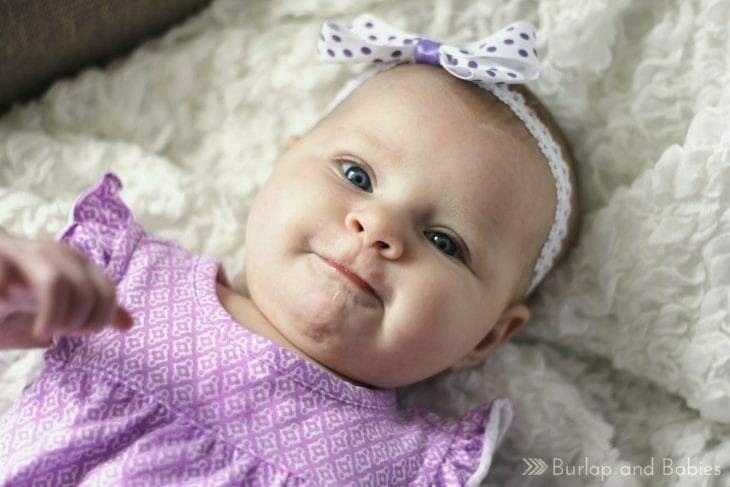 Clara does not enjoy spicy food. I rarely eat spicy food but did one night for dinner. The next day, my sweet little girl who typically poops once a day pooped eight times. Yes, EIGHT TIMES! Gross!! Let’s just say I’m taking a break from spicy food for a little bit.

Clara is definitely eating faster. She still eats four times a day for about 40 minutes each time. When she wakes up, around 11:30, around 3:30, and bedtime. It’s great that she has made her own schedule because then I can plan our day better.

We are still using the nipple shield. I worked to get it off last week for four days and successfully did a few feeds with out it but then I noticed her latch was getting weird, she started struggling, I was in lots of pain, and then ultimately I ended up with a blood blister. They say one day it will just come off and she will never look back. So, it’s back on and in a few more weeks I’ll try taking it off again. 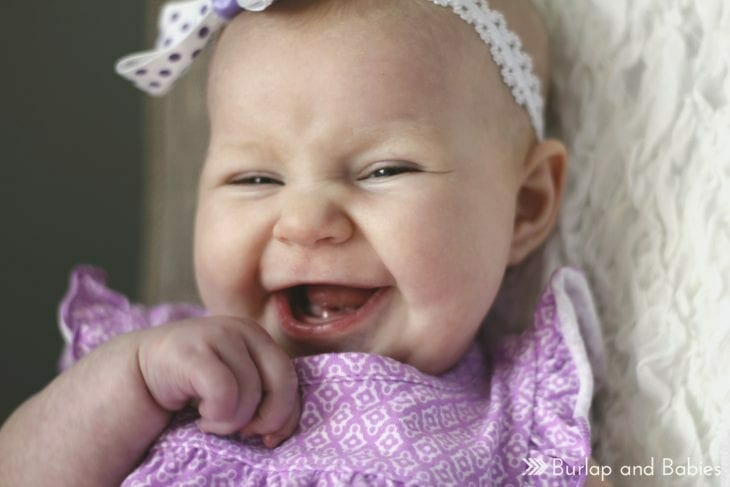 Still a champ. After her nighttime feeding (around 9pm), daddy carries her to her crib, lays her down, turns on the white noise, and walks out. She stays happy and content in her crib until around 7ish. For several days last week she actually was staying in her crib until around 8:30am. I honestly was getting bored waiting for her to get up. Some nights I hear her wake up but she always puts herself back to sleep, usually by sucking her fingers. I love having the video monitor because I can see what’s going on and don’t have to get out of bed to check on her. She rarely wakes up crying anymore. Once I hear her up and stirring I’ll let her hang out and sometimes she falls back asleep. If she is still restless about 10 minutes later then I’ll go get her up for the morning.

Clara, however, will still not take naps in her crib. The longest she has gone is 20 minutes one time but usually all her naps are in the swing if we are home.

Definitely growing. She has some major arm and leg rolls now and is definitely getting heavy when I have to carry her for longer periods. I’m guessing around 14 pounds. She is wearing 0-3 month clothes and we just moved to size 2 diapers last week. 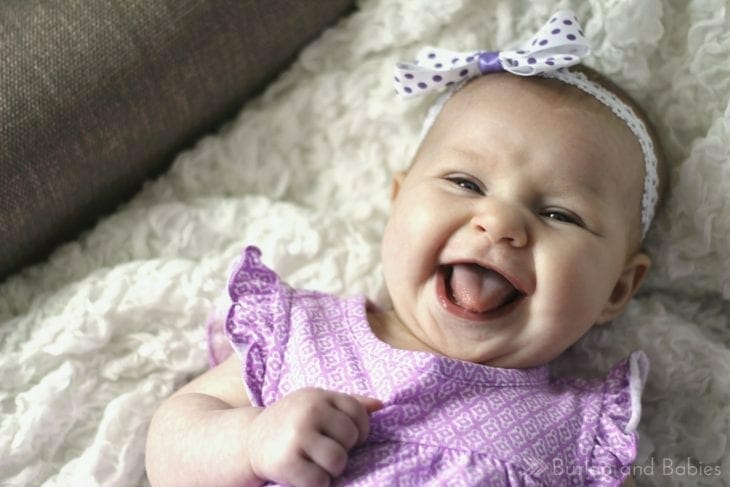 Loves her momma. Clara has major separation anxiety and has for quite some time. It’s actually pretty sad but it makes me feel loved. As soon as she’s back in my arms it is almost instant relief and she’s all better. Definitely a momma’s girl right now. 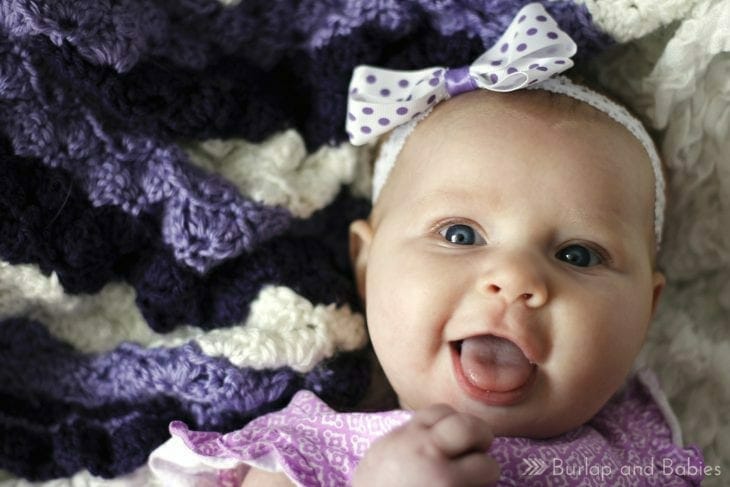 Doesn’t really have any that I can think of. Clara is such an easy baby and I am so blessed to be her momma. Around 2:30-4 I’ve noticed she’s been having a tougher time lately but if I move her feedings a little closer to when she wakes up from her afternoon nap she seems to do better.

I think those are all the big updates from Clara’s fourth month of life.

What milestones and growth should we expect for month 5?