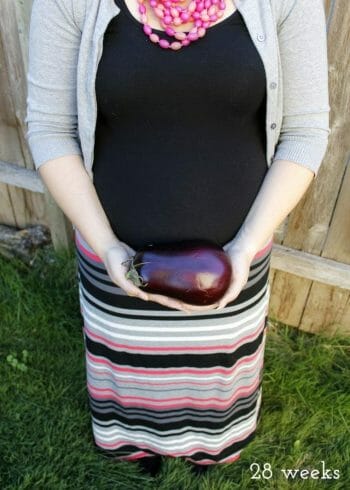 Can you believe that I’m already to the third trimester?! I could jump for joy I’m so excited! Not because I hate being pregnant but just because I’m that much closer to meeting my little one. And check out that bump bump from the beginning of the first trimester when I was only 4 weeks, beginning of the second trimester, to today. Whoah baby! She is certainly growing.

How far along? 28 weeks. Babe is the size of an eggplant. We could only find smaller eggplants in the store but pretend it’s 15 inches long and weighs about 2 pounds.

Maternity clothes: For sure! Funny quick story, on Tuesday I wore a dress to work that I haven’t worn in about a month. By about 9 o’clock, I came to the conclusion that either I had two options to get through the day: breathe or talk. Not both! The dress was practically suffocating me. Thankfully, my sister came to the rescue and literally gave me the clothes off her back so that I could get through the day. And let’s just say that dress got thrown to the “after-baby-pile” that evening.

Sleep: Going good still. That snoogle does wonders!! Still only getting up to go to the bathroom once a night so that’s a bonus!

Food cravings:  Been wanting Cafe Yumm after work lately…does that count as a craving?

Symptoms: I’d be lying if I said I had none as I stare at my sausage toes sticking up on a pile of pillows trying to get the swelling to go down. This last week has been rough with the swelling in my feet. Actually making my legs itch some and ache by the afternoon. Hoping that I can get that under control now that the hot weather is hopefully on it’s way out after this last weekend of high 90s coming our way. Other symptoms include just the normal pregnancy stuff like weight gain and feeling a little one inside me.

Total weight gain: As of yesterday I have gained a total of 23 pounds. I am really working to do better with my eating so I think that is helping but definitely still not as good as it should be.

Movement: So at 26 weeks she was moving just in the evenings for the most part. Can’t believe how much can change in two weeks!! I pretty much feel her at least once every few minutes of every waking moment. Whether it’s her little fingers tickling inside, a turn, or sometimes a jab of a foot — this little one is sure active!! And I love every minute of it! Sometimes I find myself in the evening just staring at my moving stomach dreaming of the day I get to hold her in my arms.

Gender: Sweet baby girl! If you missed our gender reveal post, you can read all about it HERE.

Labor Signs: Get Braxton-Hicks sometimes but not often anymore. During the half marathon a few weekends ago, however, I was having them every 5-10 minutes when I would try to run. Let’s just say it ended up being a full walking half-marathon as I did not want that little one coming early just because I was trying to be tough.

Belly button in or out? In still.

Wedding ring on or off? On, my fingers still don’t seem to be getting swollen which is really nice.

Happy or moody: Happy!! Love that I get to be a mommy soon. Less than 90 days until our due date!!

Best moment this week: Bought little one’s going home from the birth center outfit while Carter’s was having an amazing 50% off Labor Day Sale! Also, bought some adorable Christmas outfits that were half off too!

Looking forward to: Painting the nursery next week!! And then I get to start going crazy on decorating and putting everything together.