Having known what gender little babe is for the past week and a half….plenty of people have had conversations with mr g and I and have all come to their own conclusion about what little one is. Someone may have the exact same conversation with me but come to a completely different conclusion. I find it hilarious listening to people’s reasoning’s.

I was talking to some people today about it and it’s just too funny to not document. One day little one might want to know about all the people that love {s}he so much even before being born. Enough that people practically spend hours a day saying different things to me hoping I’ll slip up or spill the beans. Here’s just some of the things I’ve heard. Plus another little sneak peek at the gender reveal pictures.

Scenario #1
After our paint fight, mr g was walking away from our paint crime scene when a cop drove up and asked if he was okay. The cop then laughingly asked “did you lose a bet?!”

Conclusion A: After my sister heard this story she automatically was convinced it’s a girl because why else would a cop question a guy for losing a bet unless he was covered in pink paint.

Conclusion B: A coworker of mr g’s is convinced that little one must be a boy or else the cop would have been more concerned. He also has convinced his wife it’s a boy because he is so 100% sure it’s a boy after hearing this story.

Scenario #2
When talking to people about our 20 week ultrasound they ask how sure the tech was about the gender. When I asked the tech, he said I’m 100% sure on the gender. He exuded confidence and says he’s never been wrong in 4 years!

Our chaplain from the retirement community I work at has told people he “knows what the baby is because I slipped up” by telling him the tech was 100% and the only way the tech could be 100% is if it’s a boy. Apparently he doesn’t believe me when I told him I’ve told many people this story and others have yet to draw these same conclusions and that the tech has a very high accuracy rate.

Scenario #3
And then there’s the people we talk with who are just itching to know the gender and read in to every little tid bit of info we say. For example, my big burly maintenance man at work was talking to me about this adorable baby girl crochet blanket he has to give away. He’s hoping I have a girl so that he can gift it to me. Later I found out he is convinced baby G is a boy because after our conversation, and I quote, “I went back to my office and analyzed our whole conversation and based on the little things you said, you’re having a boy.” Man these people are funny!

I can honestly say I have not slipped up once and nothing I have said would make someone assume one way or another. These people are just way too excited….and I am too!

Only 4 more days until the big reveal though!!

What do you think baby G is and why? I love hearing all about the why behind what people think so don’t leave that part out! 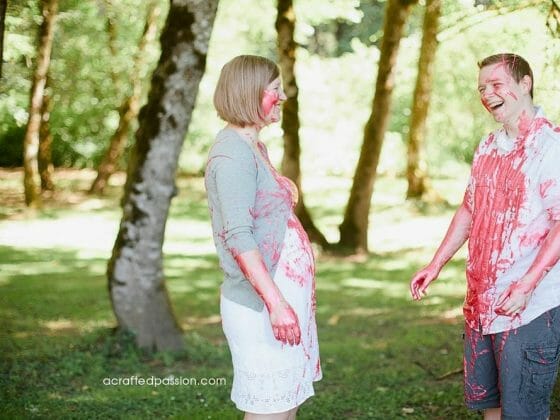